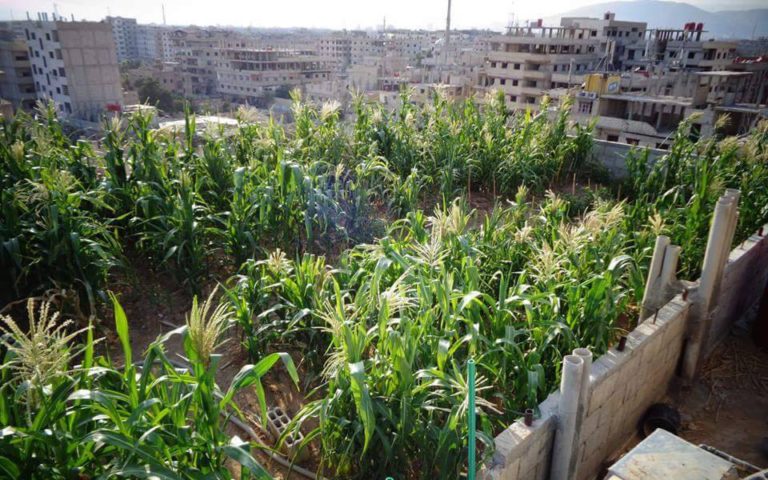 In a unique collaboration, People’s Resource Centre was able to bring together people of various countries associated with the act of urban farming either as practitioners or environmental activists and initiate a conversation about rethinking the ways our cities and economies function. It was an attempt to give space, and listen and learn from the experiences of people working in the field, in a direct conflict with the State, and how through the use of urban farming, they are able to move towards food sovereignty and also resist colonial and neoliberal forces.

In this conversation, people from Syria, Lebanon, and Palestine joined and threw light upon how the people of these conflict-ridden states are going back to their roots, using local and indigenous seeds and practices of farming to resist the occupation by the State and other forces, become self-reliant, inculcate a feeling of community, revive the lost tradition, and most importantly survive in the face of overt oppression.

Urban farming is being practised in various parts of the world, arising out of different needs and context. In India, this need has come out of the health and environment reasons which have a wide systemic impact on the cities and its infrastructure. While in Lebanon, Palestine, and Syria, it became a way to show resistance and defy occupation. It not only became a necessary means for survival but also a political act.

In India, amidst the push for “smart cities” and the imminent health and environment crisis, there is an immediate need to make space for agriculture in these city plans. Self-reliant cities is no longer a slogan but a reality we need to move towards. In a populous city like Delhi, among the debates around food security and Right to food, the need to protect and push for urban farming is now more than ever. Most of Delhi’s in-boundary food demand is met by the produce from the Yamuna floodplains, but still, the farmers who live here, grow the food, maintain the fertility of the soil and a green cover are categorised as “illegal”, “unauthorised”, and “encroachers”, by the official authorities.

In countries like Syria, Lebanon, and Palestine, the conflict is more direct. Syria has a long history of violence, war and dictatorship since 1963. While Palestine has faced continuing colonisation and occupation by Israel and Lebanon is a country run by different politicised sectarian elites wanting to crush any resistance. Amidst popular uprising, raging conflict and occupation, communities and activists in these countries have used urban farming not only as a way for survival but also as a way of resistance and defying occupation.

Farming is deeply entrenched in the fabric of Palestinian society. Continuing oppression and migration has damaged this fabric of a traditional agrarian society. Palestine first experienced conflict over its land during the WWI due to influx of Jews, followed by the partition plan proposed by the UN in 1947, which was rejected by the Palestinians, thus resulting in a civil war and expulsion of Palestinians from their own land, colloquially referred as Nakba or “catastrophe”. Subsequently, Israel was established or as called by Palestinians the “48 land”, leaving Gaza and West Bank to the Palestinians and a peace agreement popularly known as the Oslo Accords was signed. However, despite a peace agreement, the encroachment of Palestinian land, resources, and identity by Israel is an ongoing process.

Moreover, Palestine also opened up its economy to neoliberalism which led to the encroachment of agribusinesses that came with their destructive and exploitative approaches and practices and thus commodified food. Thus, Palestinians lost contact and connection with their land.

To resist the normative approaches of “development” being pushed by international aid agencies and the government, Palestinians moved towards agroecology as a means to food sovereignty and self-sufficiency and eventually liberation. In this, the practitioners use local resources, heirloom seeds, community and indigenous knowledge to bring back their lost identity and culture and resist the Israeli occupation. Urban farming or resistance farming has taken diverse forms in Palestine, like women in Rabud practising chemical-free agriculture, Om Sleiman Farm in West Bank, right next to the separation wall, grassroots actions like Palestine Heirloom Seed Library, forums like Palestinian Agroecological Forum, and various volunteer groups.

A similar resistance through urban farming is taking place in Syria. In 2011, there was a massive civil uprising against the dictatorial Syrian regime which was met by a violent reaction wherein 50 areas were put under siege, restricting freedom of movement and food and completely sealing off the areas. The Syrian people were left to fend for themselves and many were on the verge of starvation.

One such area was Yarmouk, home to around 30,000 people, which was hit with starvation when the siege lasted for too long. The residents converted the stadium-cum-garbage dump into agricultural land to grow their own food and feed the population. Being an urban area, they were met with difficulties like lack of seeds and equipment and one of the approaches which helped them in this crisis was coming together with the community. Thus, they accumulated plastic to melt and used it as fuel to run the tractor, made use of community knowledge and used sewage water from Damascus to irrigate the farmlands. At times, they were under danger due to shelling and had to farm at night to avoid being detected.

Many also lost their lives in this fight through “agro-resistance”. For these people, farming was initially just a means for survival but it turned into a way to show resistance against the state’s weapon of siege.

Another kind of resistance through urban farming is taking place in Lebanon which has a history of “garbage crisis”. It first started off as a resistance against the government’s “development” project which was not only anti-environment but also anti-people. The government aimed to transfer 3,500 tons of garbage every day from Beirut and Mount Lebanon to the Eastern area or the Anti-Lebanon Mountains, right above a big water source for 70 villages. A few protests by 4-5 youths soon turned into a huge movement called “On the road”, garnering support from the citizens, scientists, environmental activists as well as people from across the world. This again did not come without its dangers which also took the form of death threats from opposing forces. As a result, these young people were able to engage in a dialogue with the State to provide an alternative to deal with the garbage problem by moving towards food sovereignty and agroecology. In 2016, they set up their own, personally funded, sorting facility and a farm, called “Our seeds are our roots”, where heirloom seeds (local and indigenous) were produced. As of now, the farm produces its own food, trains people, disseminates their knowledge and attempts to show that there is another way, an alternative.

What is taking place in Syria, Lebanon, Palestine and India, are not just random acts of urban farming but a movement which is resisting the corporatization of farming, encroachment by neo-liberal and imperial forces, “development” narratives of the State and also attempting to save indigenous knowledge, practices and move towards food sovereignty.