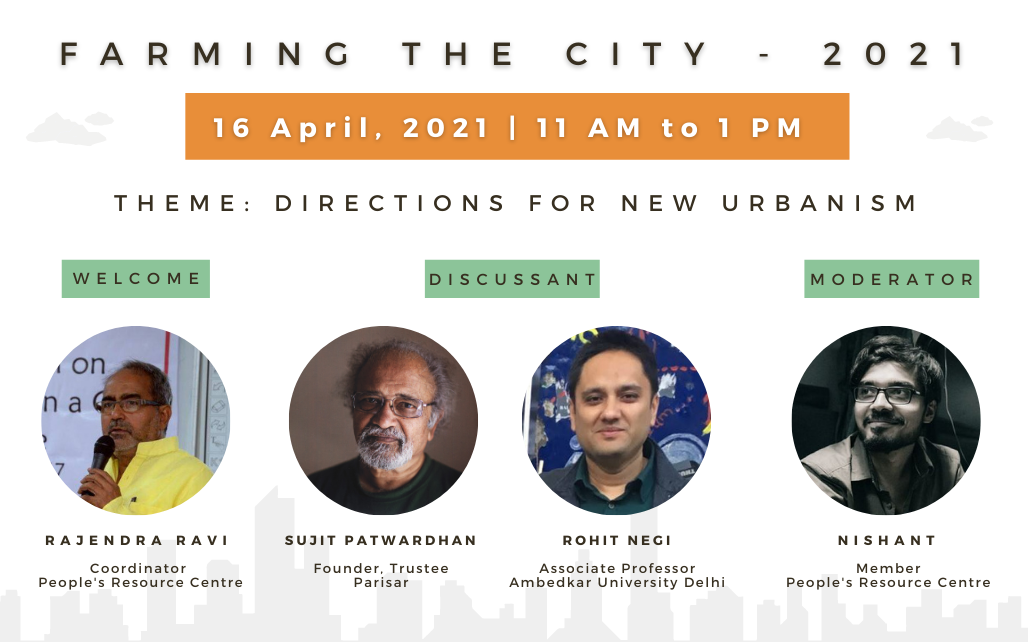 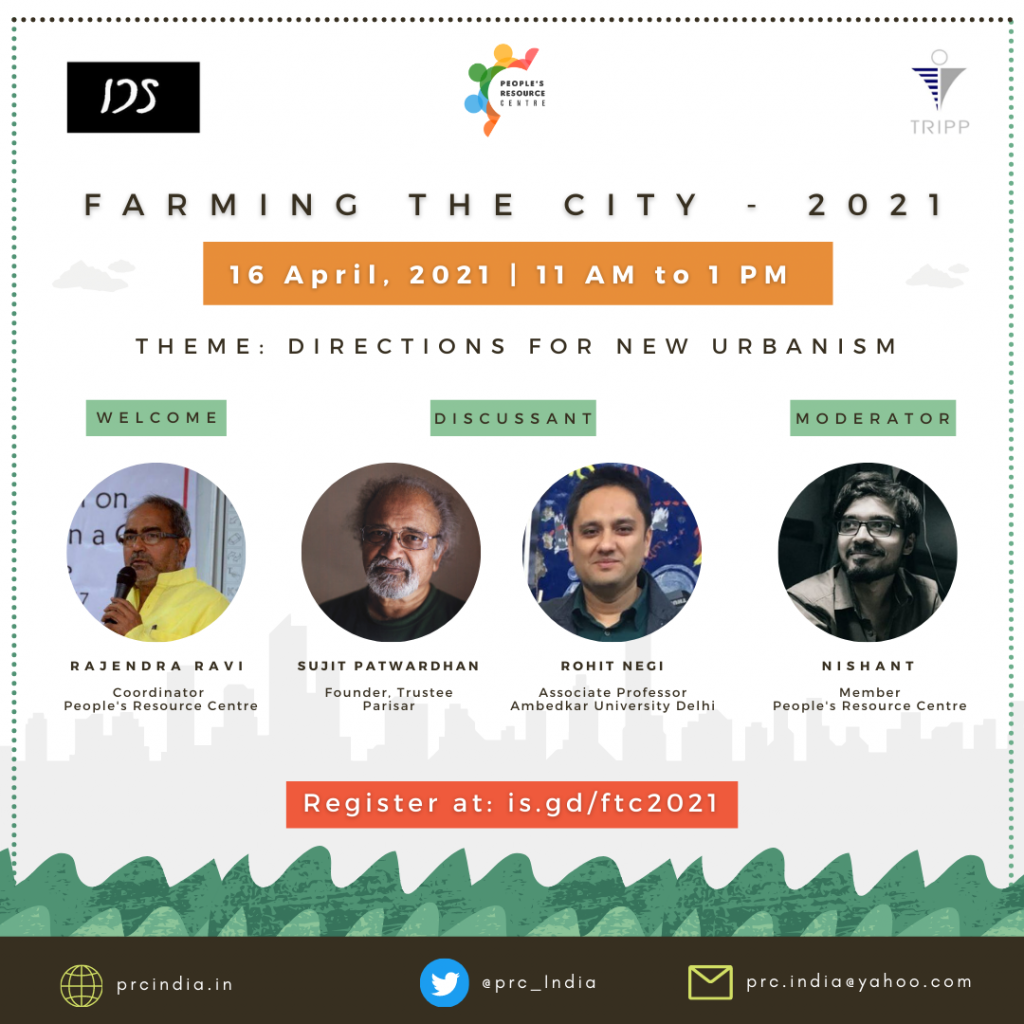 The introductory session of Farming the City 21 will be centred around the idea of how modern capitalist cities are the engines of multifaceted crisis which is becoming more visible in the form of dispossession, extractivism and environmental degradation. There has been a large scale rise in urban population, partially owing to migration from rural to urban areas, which has resulted in increased pressure on different urban systems such as food, sanitation, water, sanitation and there seems to be a rekindling of interest in finding alternatives to make the urban centres more sustainable and inclusive for all.

Rajendra Ravi is the founding member and the current programme coordinator of People’s Resource Centre. He has been conducting research on the intersection of urban politics and sustainability for more than 3 decades.

Nishant is a PhD scholar at IIT Delhi and a member of People’s Resource Centre.

Sujit Patwardhan is a graphic designer by profession. Interested in photography, calligraphy, painting, typography and the environment. Founder and Trustee of Parisar (an environmental NGO) started in 1987.

Rohit Negi is an associate professor of urban studies at Ambedkar University Delhi. He has been working on the issue of air pollution advocacy in and around Delhi area since 2015. 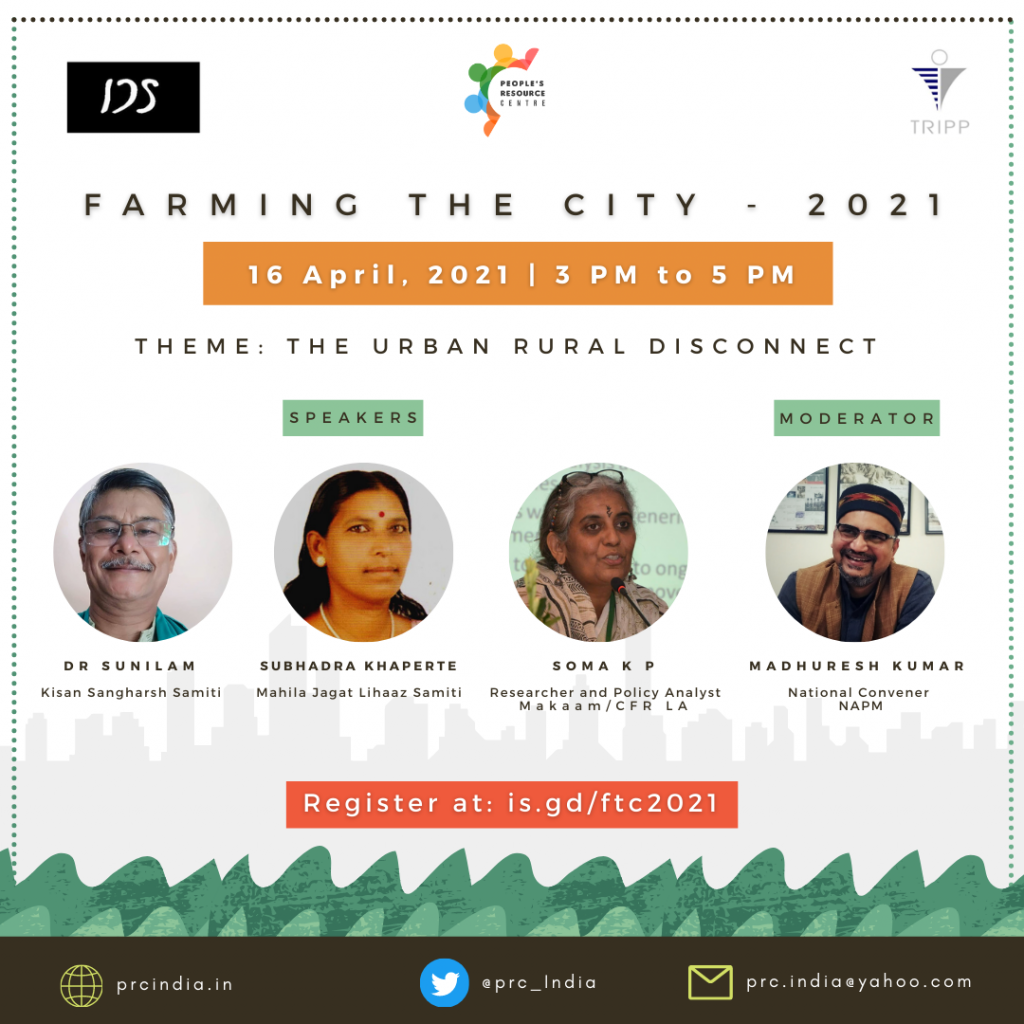 In this session, the focus would be on the growing divide between urban and rural India in the broader context of state-sponsored corporatisation of agriculture and food system, especially through the new farm laws. Amid the nation-wide protests by farmers against the new laws, the session will try to locate the place of urban farming and other community-led alternatives in bringing meaningful change towards a healthier and harmonious relationship between the city and the village.

Dr Sunilam is a socialist who has been MLA from Multai Assembly Constituency, MP twice. He is the General Secretary of Samajwadi samagam and President Kisan Sangharsh Samiti. He is one of the national convenors of NAPM.

Subhadra Khaperde, hailing from a Dalit marginal farmer family in Chhattisgarh, began work as an activist for a land rights movement based on Gandhian principles in 1989. She is pursuing a PhD and continues to work in the field on gender rights, reproductive health, livelihoods, natural resource conservation, sustainable agriculture, food security and education through the NGO Mahila Jagat Lihaaz Samiti in Madhya Pradesh.

Soma KP is a researcher and policy analyst who is also associated with MAKAAM. Her background is in urban and regional planning.

Madhuresh Kumar is the National Convener of National Alliance of People’s Movements (NAPM) and Resistance Studies Fellow at University of Massachusetts, Amherst. He writes regularly on people’s resistance and is involved in several national and international networks.

Click here to watch the recording of the session