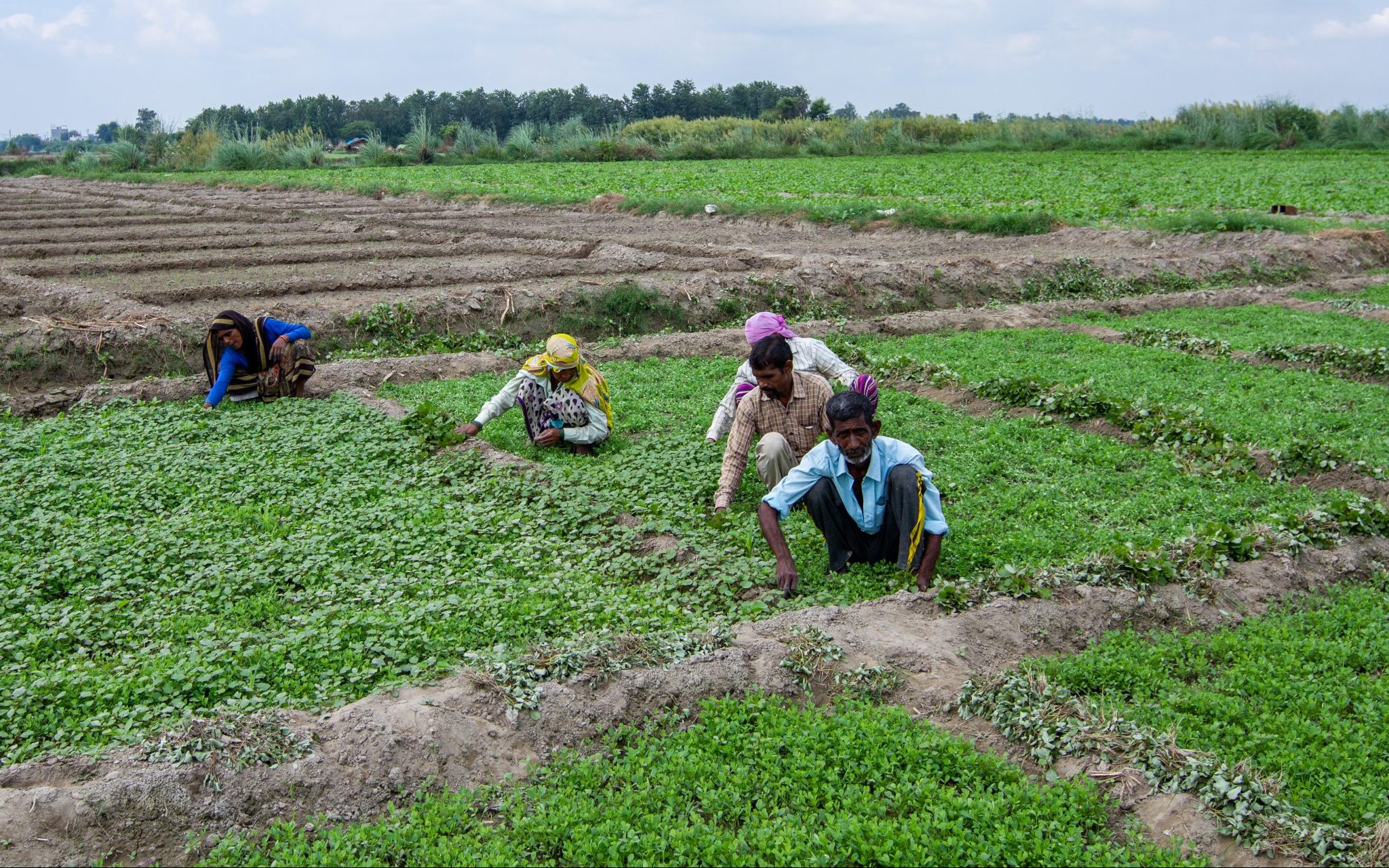 Delhi is one of the most densely populated cities of India with an average density of 50 persons per acre of land. It is predicted that Delhi’s population is only going to increase in the coming years. As the population rises, so will the demand for food. The Right to food is considered a human right, as essential to a life with dignity. It is aligned with the Sustainable Development Goal (2) 2030 of “Zero Hunger” as well as the National Food Security Act 2013 of India. A society can be said to have attained food security only when nutritious and sufficient food is available to all.

Delhi is already dependent on its neighbouring states for meeting most its food requirements. This puts a strain on the natural resources of these states, more particularly the groundwater levels of these water-scarce states. In a comprehensive study conducted by Ramaswami et al. (2017) a framework was provided for studying the food, energy and water (FEW) requirements Delhi. It was revealed that Delhi has a demand for 9 million tons of food of which only 10%, particularly 15% of vegetables, 60% of meat and 25% of milk, is produced locally by urban and peri-urban farming and related activities and more than 80% of Delhi’s food supply comes from neighbouring states like Punjab, Haryana and U.P. This huge dependency on other states translates into a supply chain which is responsible for the generation of 1 crore tons of greenhouse gas emissions.

Urban and peri-urban farming has been taking place in Delhi for more than 40 years. It has mostly been confined to the numerous villages of Delhi which are now categorised as “urban villages”. Most of the farming takes place in areas like Chilla Khadar, Nangli Khadar, Badarpur Khadar, Mandpur Khadar, Najafgarh jheel, Tikra khurd, Tikra kala as well as on land owned by Bela State. One can find them farming at scale all year long in the Yamuna floodplains or other areas, growing rabi or kharif crops or both. While the cultivation of vegetables is a continuous process in Delhi, the major crops are paddy, jowar and bajra during Kharif and wheat and mustard crops during the Rabi seasons (Economic Survey of Delhi 2018-19). A few farmers in the Nangli Khadar and Chilla Khadar have also kept nurseries where they grow various kinds of plants which are used for decoration in wedding and other social events.

As per the Economic Survey of Delhi (2018-19), only 0.71% of the workers of Delhi are employed as agricultural workers. However, as per the past census’ of India, 1% of all main workers (who perform a particular economic activity for more than 6 months) and 3% of all marginal workers (those who work on a particular economic activity for less than 6 months) are working as either cultivators, farm labourers, on plantations, livestock, forestry, fishing, hunting, and allied activities. There is a slight discrepancy in the numbers and it raises questions on the reliability of state-led surveys. Agriculture has always been associated with “backward” and the rural. The general official understanding is that for urbanisation to occur, the number of lands under agriculture needs to go down. Even the census and other surveys consider “city” to be one where 80% of the “male” workforce is engaged in activities other than agriculture. Therefore, the discrepancy in number could be due to vested interests and external pressure to show that Delhi is indeed on a path towards urbanisation.

Majority of the people involved in farming do not own the land that they till. These “tenant farmers” use the land leased out to them for agricultural purposes. Most of the people involved in this are not native to Delhi and hail from regions like Badaun in UP, Jharkhand, Bihar, West Bengal, Uttar Pradesh and have continued the practice of farming from their villages. Farming in Delhi allows them a meaningful utilisation of their skill. They have migrated to Delhi and have set up their “kachha” houses, residing with their families, near the soil that they till, grow their crops in and make a living out of. Many also keep livestock.

Wherever one goes around the farmlands of Delhi, every farmer echoes the same story of their plight. They are landless, uncertain about their living situation, livelihood or their future in Delhi. They remain at the mercy of Delhi Development Authority (DDA) to determine till when farming could be allowed in these lands. A farmer in Chilla Khadar explained, “It is not wise to get attached to the land. If not today, tomorrow farming on these lands will come to an end.” Near Rajghat, in Jublee Park, a few farmers are members of a few cooperatives who together use 1337 acres of land for agriculture. However, in the eyes of the court, these farmers are not owners but “illegal” occupants of these lands. On Delhi’s peripheries, agriculture has been well integrated into everyday life. However, even their situation remains the same. One farmer shared his plight, “In the eyes of the government, there is no agriculture taking place in Delhi. Even now, the lands in Ladpur, Tatesar, Punjab Khod, Katevda, Mungeshpur, Kutubgadh, Jatkhod, Auchandi, Dariyapur, Nangal, Chandpur, etc have still not been acquired by the government. Despite this, they are not provided with any facilities.”

In some areas, the Delhi government and other non-government organizations have provided public welfare structures. For instance, in Chilla Khadar, the Delhi government has built two shelters and provided two water storage tanks which are filled up regularly by water tankers. Apart from this, two public washrooms have been built but no provision has been made for its regular cleaning. Despite having built structures for residing, the farmers of this place are still categorized as “homeless” in official papers. They do possess official certificates like ration card, voter id but do not have a proof of permanent residence.

For irrigation purposes, no farmer directly uses the water from the river Yamuna. Most of the farming is done on 2-3 beegha land. There are very few who farm on 10-20 beeghas of land. For ploughing, many of the big farmers use tractors while others have to rely on a tool. These small farmers also grow vegetables in raised beds. They have not been given any provisions by the government for tilling their land. Some have built bore wells on their own expense, while others use the handpump for irrigation. Other things like compost, seeds etc are procured from the market but some farmers in Chill Khadar use directly sourced manure for fertilizing their land. Moreover, these farmers also have to prepare themselves for monsoon flooding which occurs almost every year.

Nowadays, one can witness varied forms of urban farming taking place in Delhi. New forms that have come up include farming in farmhouses in Delhi-NCR, polyhouse farming, and growing mushroom beds in specially built structures.  Another type of urban farming can be observed in Delhi where people are growing fruits and vegetable as a hobby on their balconies and terraces. One such individual is  Madan Gopal Kohli of Keshavpuram who has around 20,000 plants, a few around 20 years old, in his balcony and terrace and has found mention in Limca Book of World Records.

Many young educated individuals are also indulging in farming by choice. Among one such initiative is the startup “Edible Routes” established by Kapil Mandawewala who along with his team has taken three farmhouses on lease. They rent out small plots of land to their customers who can then grow their own food. They also help in setting up kitchen gardens in houses and hold workshops on urban farming. One of such farms is a “zero waste” farm where everything from leaves to other waste is composted to be used as fertiliser. They also employ innovative techniques like drip farming.

Another community which is left out of the discourse around agricultural activities are the fisherfolk who are an important element of this ecosystem. They not only fish in the Yamuna waters but are also involved in aquaculture. Some people who fish for either sustenance or selling are also involved in other work. In Delhi, most of the fishing takes place before the Wazirabad barrage where the Yamuna waters are a lot cleaner and support aquatic life. It is only during monsoons that the aquatic life thrives across the stretch of Yamuna. Otherwise, the water beyond Wazriabad barrage is contaminated and not suitable to support any life form.

Most of the fishes found in the Yamuna are of the Pothiya class. One can also find Tangra, Baam, Kakai, Chingra (Jheenga), Pothi, Nirankar, Singhani, Rohu, etc. and sometimes a few crabs as well. The weight of the fish ranges from 50 grams to 200 grams. One fisherman sitting on the Yamuna ghats told that he has a one-year license to fish which he obtained for a fee of Rs 150. He added that the license allows him to fish freely and also provides insurance of Rs 2 lakh to his family in case of accidental death.

The Economic Survey of Delhi 2018-19 highlights the decline in fishery activities in Delhi. According to it, the fish seeds production in Delhi is 20 lakh (No’s) and fish production is 0.80 thousand tons in 2017-18. It identifies 24 water bodies in rural areas of North-west district for leasing out to the fish farmers of which some are being developed by I&FC department and Delhi Jal Board respectively.

The diversity of Delhi is also reflected in the urban farming community of the city. It attracts people from various socio-economic strata who grow everything from fruits, flowers to vegetables in either farmland or pots on balconies. Along with the produce, the purpose also varies. Therefore, it’s necessary to recognise the contribution of urban farming to the food demand of Delhi and make it a part of official discourses and public knowledge. And to do so, it’s important to know who are the people involved in it, where they come from, their histories, what they grow and how their future and the future of a sustainable city are intertwined.

(Translated and rewritten by Akshita Rawat. This booklet is the result of research and documentation by PRC team which was originally published as “Paridrishya Se Adrishya Hoti Kheti: Report on Urban Farming in Delhi”)