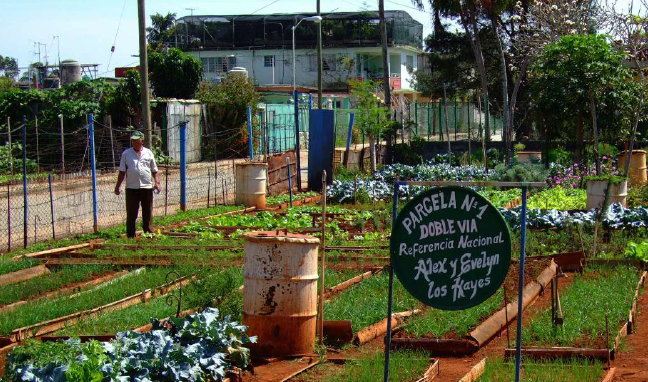 Cultivating A Crisis: What we can learn from urban agriculture in Cuba

The urban farming culture in Cuba arose from a deep crisis at the time of the collapse of the Soviet Union and its learnings bear more relevance than ever at the time when we are making our way through another global crisis precipitated by a virus. The collapse of the Soviet Union had created conditions that coerced the Cuban government to rethink their urbanization agenda and agricultural policy. Backed by confident government policies, people in Cuba led the transition from a machine- and petroleum-based agriculture and food transport system to a localized food system driven by traditional knowledge and powered by animal and manual labour.

To read the booklet in Hindi [Translated version]: Cultivating A Crisis: What We Can Learn From Urban Agriculture in Cuba

To read as pdf [Orignal English version]:  Cultivating A Crisis: What We Can Learn From Urban Agriculture in Cuba

We present here a short collection of two articles analysing the emergence and aspects of Cuba’s urban agriculture. The original article ‘Urban Agriculture in Havana’ by Sinan Koont and the review article by Christina Ergas were both originally published in the Monthly Review magazine in 2009 and 2013 respectively. We thank Martin Paddio and the editorial team of Monthly Review Press in New York for their quick response to our request to republish it for noncommercial purposes. We are highly indebted to Ashish Kothari for generously accepting our invitation to write a foreword. Ashish is a founder-member of the environmental group Kalpavriksha and currently coordinates the Vikalp Sangam (Alternatives Confluence) process.

This publication has grown out of our desire to disseminate the transformative learnings from Cuban experiments in urban agriculture, reorganization of their food system, and unorthodox planning of cities.