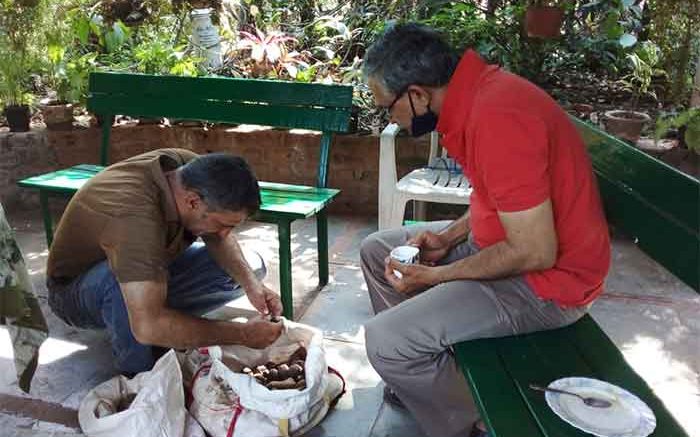 [This article originally appeared in countercurrents.org. Link to the article]

Vivek Gour Broome looks the personification of that nursery rhyme, “Old McDonald had a farm…” His farm west of Pune, beyond Hinjewadi in the village of Marunji, is an island of biodiversity – the crows were flying into the shade of the trees the morning this writer visited. The farm has several different varieties of bamboo, including the thorny bamboo whose blossoms in the Wayanad district of Kerala have foresters worried. There are cows, at least sixteen different varieties of fruit trees and a nursery with herbs that are rarely seen in the city – including sage and rosemary.

As he plucks leaves of allspice and crushes it, Broome explains that it smells of all the different spices – cinnamon, cloves, nutmeg, pepper. There are jackfruit trees and different varieties of mango and chickoo. And if you visit the farm, you may also get things you could try planting back home – like “air potato”. I had never heard of this vegetable before – “a potato the Jains can eat” Broome explains, for it grows above the ground, on a vine. It has medicinal uses too, and quite unlike the regular potato, is recommended in the diabetic’s diet. Since the growth of trees is quite thick, this farmer has planted dioscoria – roots – that allow food plants to grow wherever possible.

Broome has a pond in his farm, with blooming water lilies – the water hyacinth is taking over a portion of the pond. “That plant is just horribly defamed – it serves to clean the water,” he says.