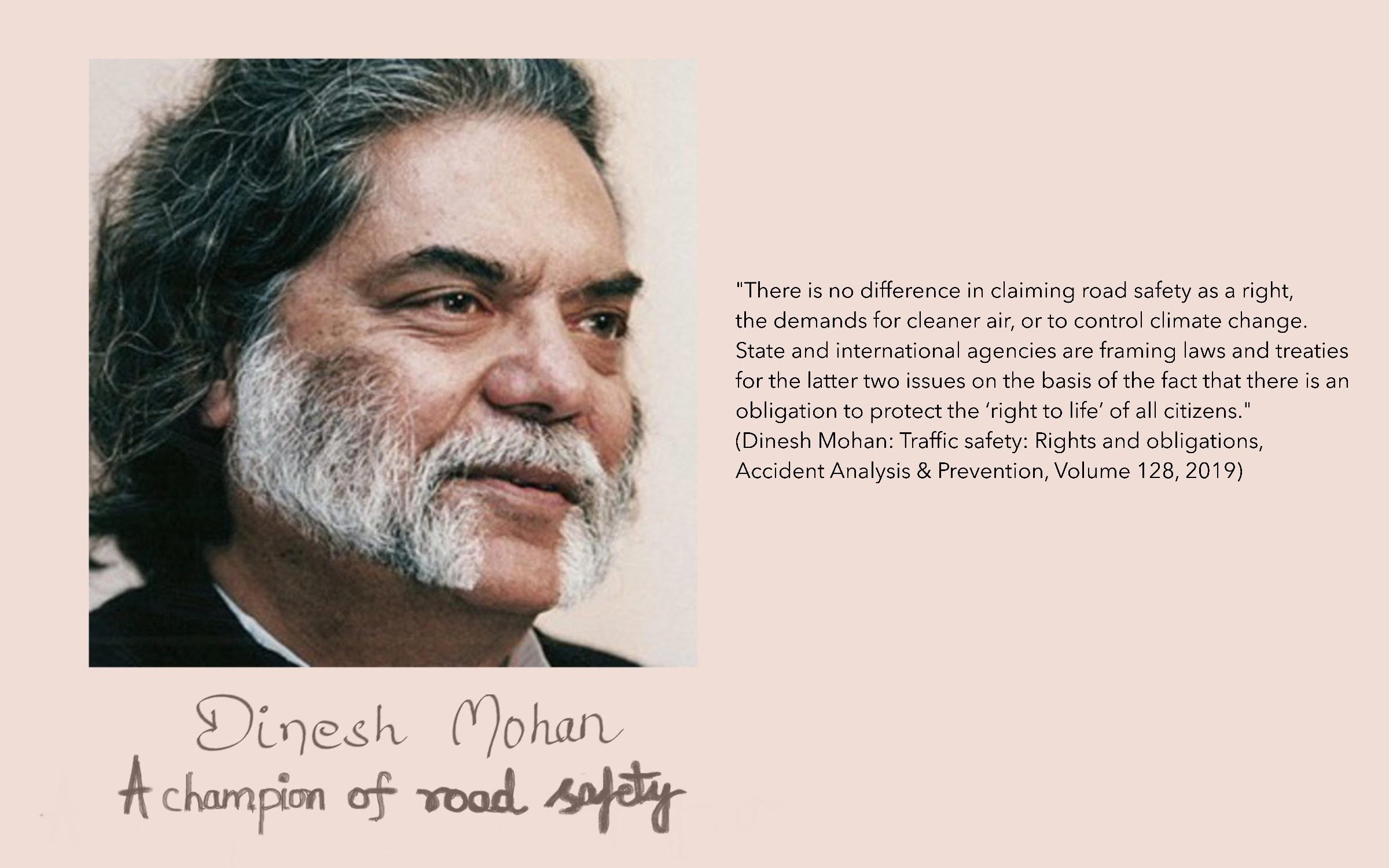 Professor Dinesh Mohan, our DM Sir, breathed his last in the morning. Many people in the country and the world, powerful and marginalized alike, knew him. But after getting the news in the morning, I keep thinking about how little I have been able to know, how careless I have been in getting to know him. But his range was so extensive that whatever I got to learn from him in a short time became learning for life.

Original thinking, free thought and a concerned voice – howsoever we remember him, these will be the essential features of his personality. Talking to him, it felt like we are talking to an institution embodied. He laid the foundation of TRIPP, IIT Delhi and shaped it to develop and foster a scientific, holistic approach to traffic safety and urban transport planning. Be it prioritizing the safety of pedestrians, bicycles and motorcycles on the road, or an accessible critique of the Delhi Metro project– his writing and lectures exemplified how to employ science to fight the myths being spread in the society by the government, bureaucracies and the rich. One of the fundamentals that he has taught to generations of students and people is to stop looking at road accidents as ‘accidents’. An accident is something that happens randomly, and nothing much can be done to prevent it. He made us conscious of seeing the road deaths resulting from ‘crash’, a process when two physical bodies collide on-road and motivated us to direct our thinking to minimize the threat to life caused by scientific understanding and better road design. His confidence and hope in Vision Zero to create a traffic system where no one dies- is a public health utopia that he made us believe in.

From the Anti-Vietnam War movement to communal violence and state atrocities in India over the years, not only did he participate in all of these agitations, but he also put in his labour to support the people’s movements. One recent and personal memory I have is the gathering that we organized just outside the Main Building of IIT Delhi the day after the JNU attacks in January last year. When we took out a procession in the IIT the following evening, the DM was standing with us, dealing with the people who were aggressively confronting us. Later, he emailed our solidarity statement to the editors of various newspapers.

I cannot talk about his contributions and his research. Many of his colleagues and students can tell this very well. One of his comments that amazed me, which keeps coming to my mind and somewhat irritates too, was that we should not insist on teaching social sciences to engineer and planners because they use neither the knowledge of engineering nor Social Sciences. His idea was to bring people with a good understanding of their disciplines together for research, but in his experience, providing knowledge of multiple disciplines to the engineering students was unlikely to give good outcomes. But, at the same time, he strongly advocated for everyone to get exposed to the research and ideas from different disciplines. His dedication to improving research and scientific research and using it to demand a better world can be gauged from the fact that he continued to come to his office in IIT Delhi from his residence in Panchsheel Park even during the year of COVID, kept writing, kept going on field trips and seminars and closely watched and commented on the directions the world was taking.

DM was genuinely radical. He tried to identify the problem at the root of all the subjects he became interested in and inspired others to take the same approach to problem-solving. But even with so much knowledge and experience, he was always gentle with everyone. I remember that when we published the report on the travel patterns in the census data, he looked carefully at its discussions and conclusions and discussed with me the issues of applying regression models. He had a clear and strong position that the coming flood of data analysis without a sound education of statistics and mathematics bears terrible dangers for scientific truth. It has become commonplace in transport research to use all sorts of quantitative data to fit established statistical models and draw conclusions. On countless occasions, after seeing such research in seminars, he kept reminding that using computers in general, model-building for many people has become like a black box in which you input something and get something out of it without knowing what happened in the process. He used to call it “garbage in, garbage out”. And pointing to the scale of this problem, he once shared that half-baked research is being published even in the reputed peer-reviewed journals because researchers are under pressure to publish more and more in less and less time.

Among the words he used to use frequently, I can hear him speaking ‘stupid’ and ‘terrible’ with a distinctive way of emphasizing. He could detect the stupidity very quickly. But the unique thing about him was that instead of making a mockery of stupidity, he used to question it so that it improved the understanding and made this an open process of learning. That is why perhaps his heavy intellectual image was neither cumbersome nor did it create fear – as is otherwise typical in our academic culture. A friend shared during a phone call that not many of us students have talked to him directly, but we will miss the confidence and warmth of his presence in the office and conference rooms.
He considered that to develop any new thinking; the essential thing was to meet more and more. Once, some of us had formed a student forum and held its first small informal meeting, which DM and Professor Geetam had not just generously attended but actively participated for two-and-a-half hours. He had shared his observation that despite having such a rich community of IIT, there is not a single place where students and professors can sit and talk freely and comfortably.

Thinking about the diversity of his inner world, I remember in a light-hued manner some aspects of his outer appearance, such as how he always wore a white, simple kurta but kept a stylish beard, and mostly I saw him with a sobering face which used to hide the child-like laugh waiting for an interesting conversation to come out. He thought milk coffee was a waste of both milk and coffee. Even the idea of landing your feet in the water on a beach seemed to irritate him because it was ‘stupid’ to get your body scratched by the salt. He once remarked that if (Inder Kumar) Gujral can become Prime Minister, anyone can become. After returning from a conference in Tanzania, he showed me photos of how the small towns there maintained hygiene because of their traditional way of life and how sanitation is a significant concern in our cities, towns and villages because of the caste system.

In a ‘non-political’ institute like IIT, a person elevated the political consciousness and added to the scientific temperament of his audience and readers. I regret that there will be no more opportunities to learn from him. Still, I am hopeful because he managed to pass on his knowledge to many people who will keep alive the courage of the lively, life-affirming Prof. Dinesh Mohan.

—
Professor Mohan gave countless lectures which deserve listening. This short video has one of the many presentations in which he shared his thoughts on the relationship of city, traffic and technology, especially when the government is pushing for a certain kind of urbanization by making smart cities etc. It is a glimpse of the various ways in which his work and life have shaped the research and action at the People’s Resource Centre.