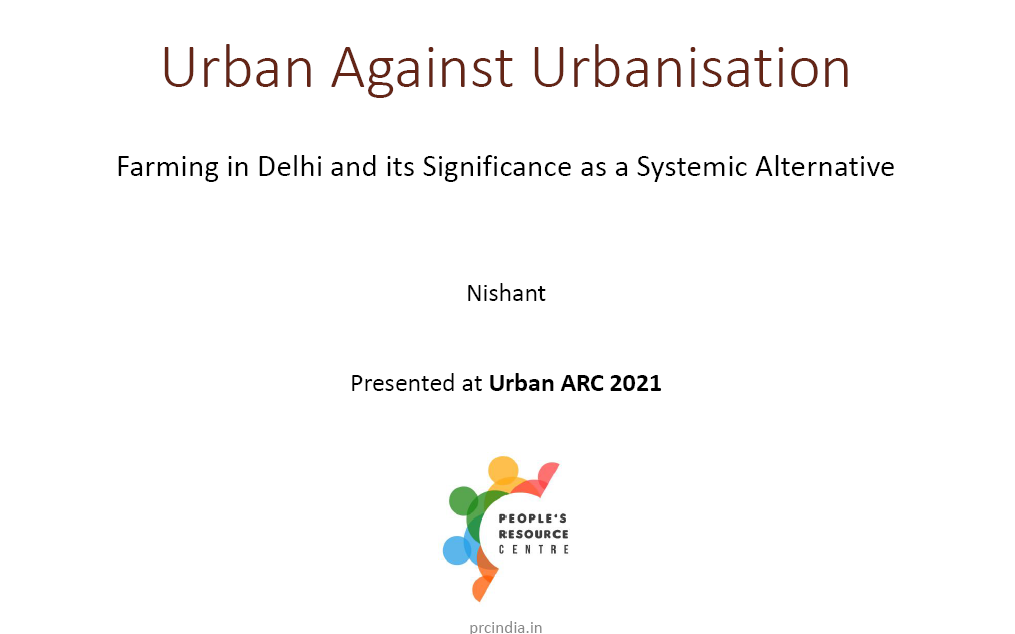 The process of urbanization is central to the viciously exclusionary and unsustainable trajectory of the dominant developmental model. Urban development guided by linear thinking and extraction-oriented urban planning is pushing for expansion of cities outwards, upwards and downwards, and thus creating newer conflicts over resources, frequently leading to dispossession of periurban and rural communities. An uncritical pursuit of this variety of development has also brought a general lack of attachment with other forms of life. Urban life is now marked with a characteristic alienation from the key social-ecological processes which have historically made the survival of human societies possible. Another kind of separation that shapes the alienation of urban life is dissipating control over one’s environment which further widens the disconnect from the processes that affect us and limits possibilities of action.

It is not surprising then that the proportion of urban food supplies being sourced from distant rural regions continues to grow, while the vast tracts of urban and peri-urban land are being consumed by the speculative growth of rent-seeking real estate. As a result, the ecological footprint of urban regions, especially that of food supply chains has grown huge. Also, tens of thousands of tonnes of waste generated in cities every day is getting piled up in landfills which have now become garbage mountains.

To address the roots of the crisis, the relationship of cities with Nature needs to be fundamentally reorganized. Practise of urban agriculture in an urban neighbourhood and the vicinity of the city is one such activity that promises a radical alternative to the increasingly globalized, financialized and ecologically intense urban food systems. By shortening the food chains and by creating feedback linkages between food, waste and energy systems, it promises to not only bring down the overall ecological footprint of the city regions, but also let people take back control over the conditions in which their food grows, balance the nutritional composition of their diet, and reduce the number of toxic chemicals both in food and in the ambient environment. Urban agricultural production supplements the household food supplies and thus brings down the expenditure on food and increases effective household income. This has the potential to strengthen the interpersonal and communal bonds in urban neighbourhoods by creating local markets for the exchange of home-grown food and food grown in community gardens. UA can enable the practitioners and urban residents to cope with stressful urban life and improve mental health, and thus contribute to the overall well-being. Thus, municipal-level decentralized coordination of urban farming activities can help a city region achieve significantly greater sovereignty over food, land, water, energy, livelihood and knowledge.

Urban agriculture is a diverse set of practices with a wide range of objectives, inputs, outcomes, agents, processes, and feedback loops. These include agriculture in urban and periurban fields, rooftops and backyard gardens, and allied livelihoods including poultry, dairy, cattle and other forms of livestock farming, sericulture, aquaculture (in a river, pond, or other water bodies). The ecosystem of urban agriculture includes not only these different forms of farming but also the waste recycling and composting process, using its outcome as organic inputs to take care of the soil, sustainable management of water resources, grazing fields and other urban commons, freight transport system, use of renewable energy sources at the farm, and so on.

This paper presents an overview of urban agriculture in Delhi and its suburbs. Extensive fieldwork was conducted for eight months to cover all the areas in and around Delhi and more than 100 people were interviewed which include the farmers, agribusiness entrepreneurs, terrace gardeners, and researchers. Our findings suggest that there has been a serious decline in farming and allied activities in the study region due to issues of land governance, water pollution, exclusion in planning, etc. But the role of urban agriculture in the overall food security of Delhi, particularly concerning vegetables, milk and meat, remains more than significant. However, the systematic neglect and exploitation of farmers have pushed urban and periurban farming in Delhi to the margins and it has become nearly invisible.

The inimical relationship between the global current of urbanization and local practices of urban agriculture is exhibited in the form of end of the land tenure system, treatment of urban farming on the Yamuna floodplains as illegal, absence of housing, transport and other basic amenities, and the risk of loss of livelihood. Interestingly, the findings suggest that women are an integral part of the urban agriculture workforce, which is also consistent with the findings in previous studies on the subject across the globe. We also found that this is one of the very few meaningful livelihood options for the migrant poor who are traditionally skilled at farming. Thus, it can be seen as a strategy for the conservation of rural knowledge along with the protection of the urban environment.

Urban agriculture has not received much scholarly and policy attention in the past. However, the trend seems to be changing with more empirical research being conducted to assess the benefits of various types of urban farming. Globally, cities in Cuba, Vietnam and Japan, and various African cities such as Nairobi and Kampala are some of the real-world examples of how urban agriculture can become a key feature of urban development and transition to an alternative organization of urban resources. We argue that Delhi and other cities in India should learn about (but not replicate) these initiatives in more detail and reconsider their urban policies in the light of these inspiring stories of collective endeavour. It is tragic that because of the lack of institutional support, many sites of urban agriculture today are illegal. Therefore, we strongly recommend that cities move towards embracing urban agriculture wholeheartedly in their future policy and planning frameworks. It is high time that we create a critical mass of the urban farming community and seek ways of expanding it in our crisis-ridden cities.