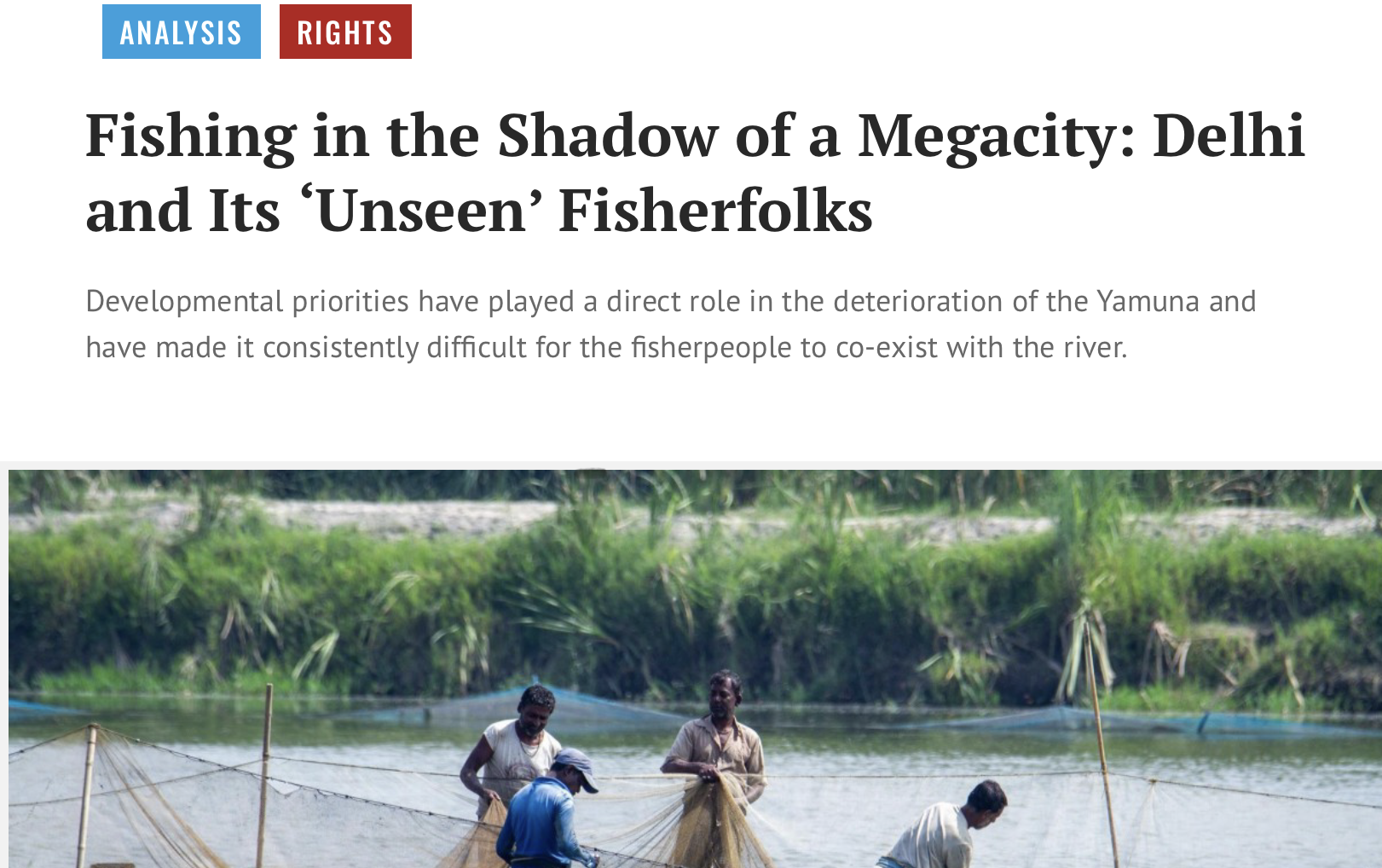 [This article written by Akshita Rawat was originally published in The Wire. For readability purposes, the text is being reproduced here.]

Developmental priorities have played a direct role in the deterioration of the Yamuna and have made it consistently difficult for the fisherpeople to co-exist with the river.

The Yamuna has a longstanding history with the city of Delhi. The Yamuna is not only historically and culturally significant to Delhi, which developed on the banks of the river, but also central to the national capital’s visual imagination.

It has been a source of life for thousands of years, providing drinking water, resources for food, livelihood, and even a breeding ground for many aquatic organisms. However, under pressure from forces of ‘development’, the river has been heavily exploited, becoming a dumping ground for anything the city cannot find a use for.

Every day, large volumes of toxic effluents from the industries, sewage flowing through its tributaries are released, untreated, directly into the Yamuna, and construction waste and debris are thrown on its banks. Despite various rejuvenation plans and multiple orders by courts and government bodies, the exploitation of the Yamuna under the extractivist developmental regime continues, making it as polluted as it was years ago.

Contrary to popular perception, not the whole 22 km-long stretch of the Yamuna which falls within the administrative boundaries of Delhi is polluted. The northern stretches of the river, lying in the Wazirabad-Jagatpur area, have been able to skip the ecological damages thrust upon it by the megacity. Nestled in this corner of the city in places like Jagatpur, Sonia Vihar, etc, are small communities of fisher people living in the vicinities of the river, mostly hailing from Bihar or West Bengal. In this area lies the oldest colonies of Burari, home to a small community of fishers since the 1980s, who are Bangla-speaking migrants from Bengal or Bangladesh region, colloquially known as Bengali Colony. 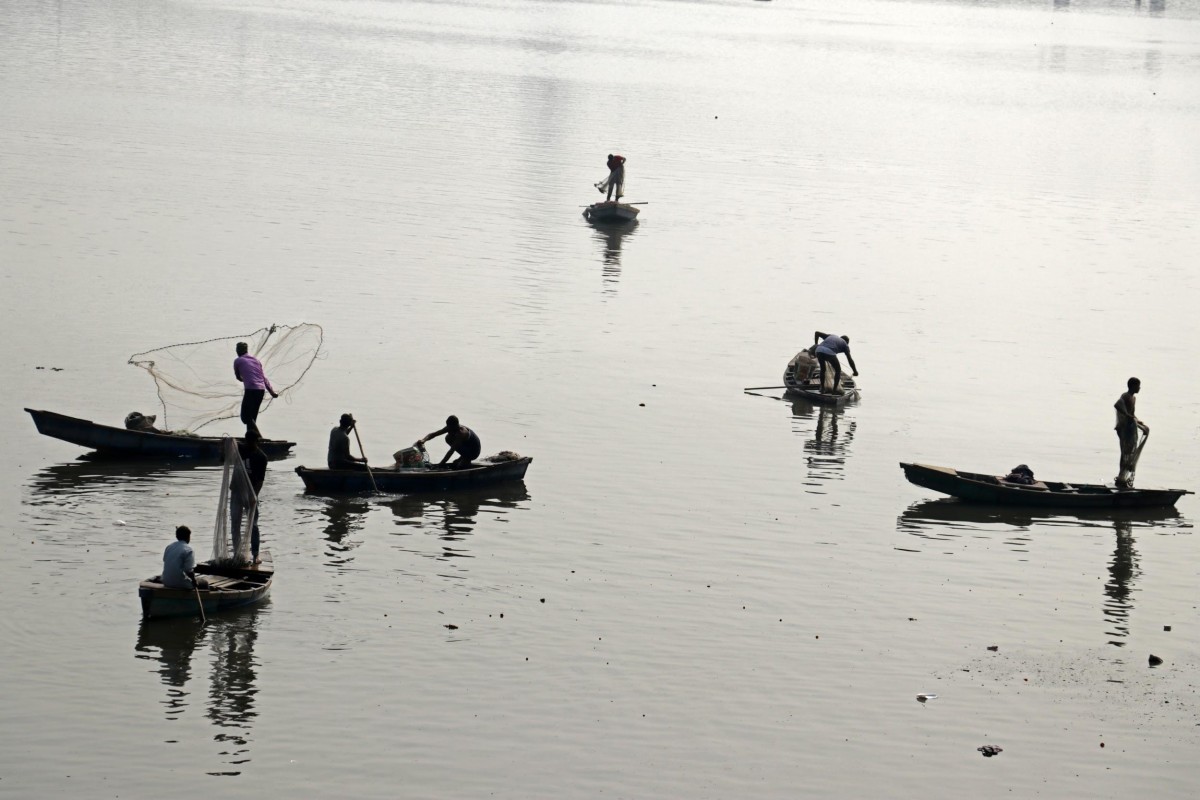 Living at a walkable distance from the river allows the fishers the ease of carrying their nets and other tools every day early in the morning to the Yamuna ghats, thus reducing the distance between their place of work and home. Even the product is either sold locally or used for their consumption and this avoids their economic activities from being directly plugged into the globalised commodity market.

Though their livelihood strategies have helped protect the river from some severe ecological damages, one can hardly find any reportage on their present, past, or future.

Not all who indulge in fishing are fishers by caste. Tyagi (an upper caste in this part of North India) are demographically dominant in Burari. While Jagatpur village is inhabited by people from places like Uttar Pradesh, Jharkhand, Chhattisgarh, West Bengal, but the majority of the population is Gujjars.

For many, fishing is not their primary source of income. It acts as a recourse when other petty jobs like masonry, playing dhol (a type of drum popular in the Indian subcontinent), wall painting, etc are unavailable or on a public holiday. Of those who indulge in subsistence fishing, some see it as a hobby that keeps them close to nature, while others see it as a way to preserve traditional knowledge and practices.

Many argue for a blanket ban on fishing and farming activities in the Yamuna on the ground that the Yamuna waters are polluted. However, multiple studies have shown that the dissolved oxygen level in the river stretch from Palla to Jagatpur, lying above the Wazirabad barrage, is well within the standard range set by bodies like the Environmental Protection Agency (EPA), World Health Organization (WHO) and Bureau of Indian Standards (BIS) for the healthy growth of fish and other aquatic life. Nearly all of the fishing in Delhi takes place in this northern stretch of the Yamuna. Moreover, a good share of drinking water for people in Delhi is taken from this part of Yamuna (CPCB, 2006). The Yamuna gets heavily polluted in the region south of Wazirabad, primarily because of the inflow of the Najafgarh drain, turning the water quality toxic.

Fishing in the Yamuna takes place in a very scattered and unorganised manner. There are very few cooperatives registered and people either fish alone or in small groups, some unaware that a license could be acquired for fishing. The task is further made difficult by the government departments and the officer-in-charge’s narrow understanding of unions as limited to factory workers and government employees. Some fishermen, despite having a license, undergone training, and residing in Delhi for more than 40 years, could not get their cooperative registered as they were unable to produce the certificates/proofs linking them to their ancestral communities in West Bengal.

Registration of cooperative allows the fisher to indulge in cage fishing, thus being able to breed fishes and also become beneficiaries of government subsidies. A fisher sitting on the Yamuna ghats explained that a year’s license which cost him Rs 150, also guarantees insurance of Rs 2 lakh to his family in case of accidental death. As per the Development Department of the government of NCT of Delhi website, licenses for fishing with a rod and line cost Rs 3/day in the Delhi area and Rs 20/day in the Okhla area. While the annual license ranges between Rs 150 – 300 depending on the area and pieces of equipment. 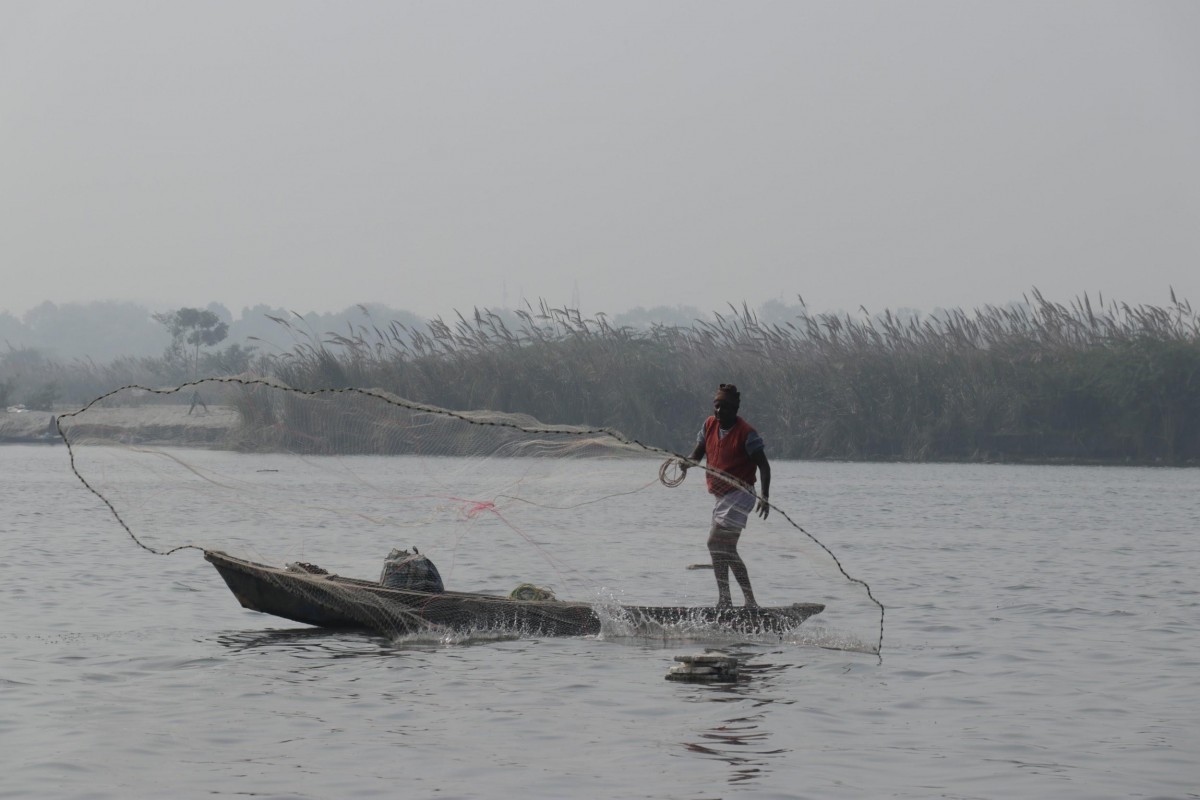 Apart from the Yamuna streams, one can also find fishing taking place in lakes on the banks of Yamuna like near Golden Jubilee Park (Bela Estate). However, fishers see the Yamuna waters as the safer option, invoking the idea of Yamuna as a public space or commons, over which everyone, be it an individual or a more organised group, can express their right.

The fisherfolk of Delhi are absent from public discourses, regulatory frameworks and policies, and even academic literature. It is even difficult to find any study on them. The official records like of the Department of Animal Husbandry, Dairying and Fisheries under the Ministry of Agriculture and Farmers Welfare of the Union government tell us nothing to give insight into their living conditions, apart from their dwindling numbers.

Schemes like the government of India’s Neel Kranti (Blue Revolution) Mission, launched with a budget of Rs 3,000 crore, of which 1 crore was given to Delhi government, with the aim of ‘integrated development and management of fisheries’ though, on paper, seem all-encompassing, focusing on aspects like enhancement of fish production, insurance, skill development, housing, the income of fishers and fish farmers, private investment, storage infrastructure, etc but it is difficult to make claims upon their effectiveness and utilization of funds for the welfare of the unregistered and unseen fishing community of Delhi.

A Draft National Policy For Inland Fisheries (2019) was formed by an expert committee under the Ministry of Agriculture and Farmers Welfare after much push from the National Platform for Small Scale Fish Workers (Inland) [NPSSFW(I)] in 2016. It emphasized the management of fisheries as integral to river management and drew a link between fisheries and aquaculture and agriculture. It further made mention of the National Water Policy, 2012 which recognizes the use of water as a right to life and livelihood and a need to revise it to include the right to water for fisheries and aquaculture having non-consumptive water usage.

Though flooding of the Yamuna is an annual affair, it proves to be beneficial for the fishing activities in Delhi. When waters are released from the dams in the north, the flow of fish increases and more fish come to the surface as the water level rises. However, the increasing level of pollution has affected the fish population over the years. One fisherman explained to us that the pollution from factories in Haryana has made it difficult for fish to access food which has further caused undernourishment in the fish population of Yamuna.

Historically, the consumption of vegetarian food over meat has been higher in Delhi. Older residents recall how difficult it was to find fish in the markets of Delhi, with very few fish markets available, Jama Masjid was the primary destination. A large part of the consumers were the Bengalis residing in C.R Park. Apart from them, fish was also demanded by migrants from Bihar, especially from north Bihar, who have fish as an essential component of their traditional diet. 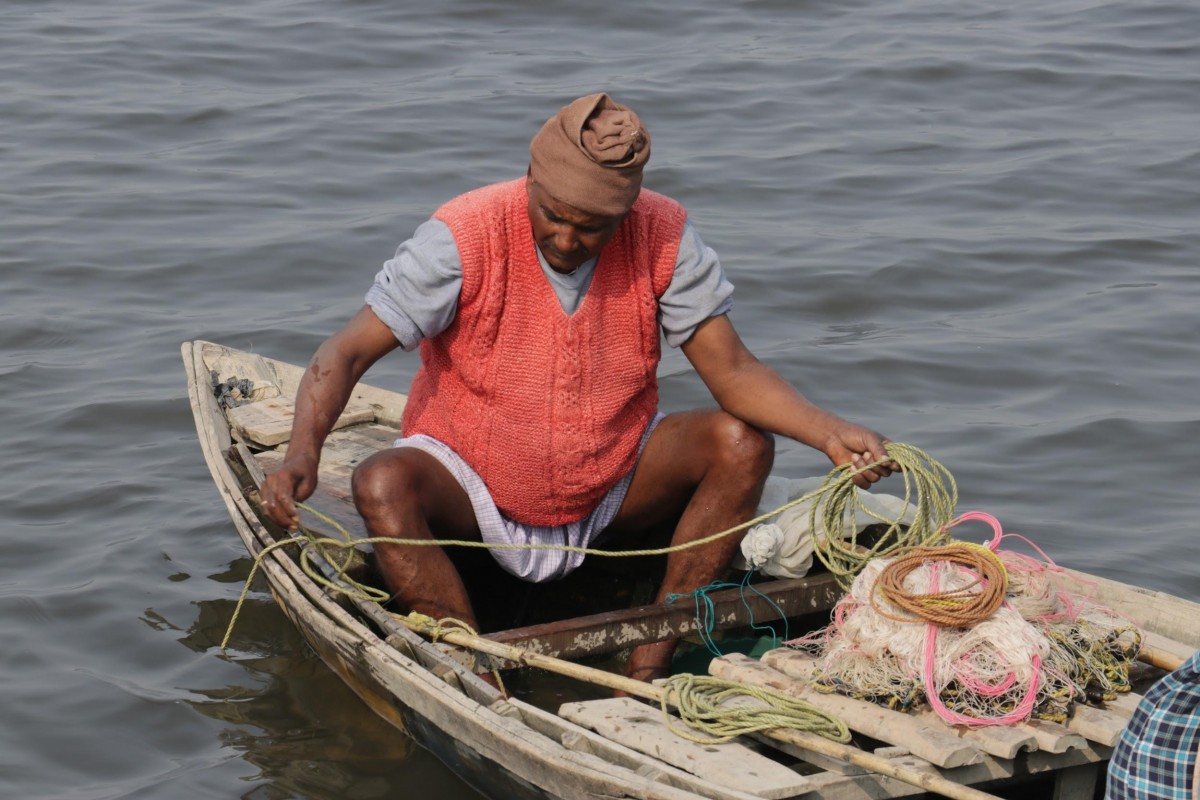 As per the 68th round of NSSO (2011-12), fish was a regularly consumed item in 6% of households of Delhi, with the monthly per capita quantity of fish (including prawn) consumption being 17 grams in urban and 160 grams in rural areas. The situation has somewhat changed in North Delhi possibly due to the settlement of the fisher communities in the areas north of Wazirabad in the 1980s.

During the year 2017-18, Delhi’s output of the inland fisheries sector (measured in monetary terms at the 2011-12 prices) was Rs 9.8 crore, being consistently the same in the last decade (NSSO, 2020). Over the years, wholesale fish markets have also come up in many parts of Delhi, namely, in West Delhi, Ghazipur, and Jahangirpuri where fish, brought from Andhra Pradesh and Haryana in big and small container trucks are made available. It is important to note that the current food demand of Delhi is being met mainly by supplies from Haryana, Punjab, and Uttar Pradesh.

There exists a lack of necessary information and public attention on the significance of the fisherpeople of Delhi. Developmental priorities, the antagonism between nature and urbanisation, and the bureaucratic processes have not only played a direct role in the deterioration of the Yamuna but have also made it consistently difficult for the fisherpeople to co-exist with the river and continue their symbiotic relationship. The river is a “commons” and the responsibility for the sustainable and socially useful appropriation of the commons lies with the ‘public’. Therefore it is imperative to include the fisher community as a stakeholder in discussions around the issues of the rejuvenation of Yamuna and protection of the urban environment.

This article is a result of the insights and suggestions provided by Radheshyam Mangolpuri, Rajendra Ravi, Nishant, and other members of People’s Resource Centre.