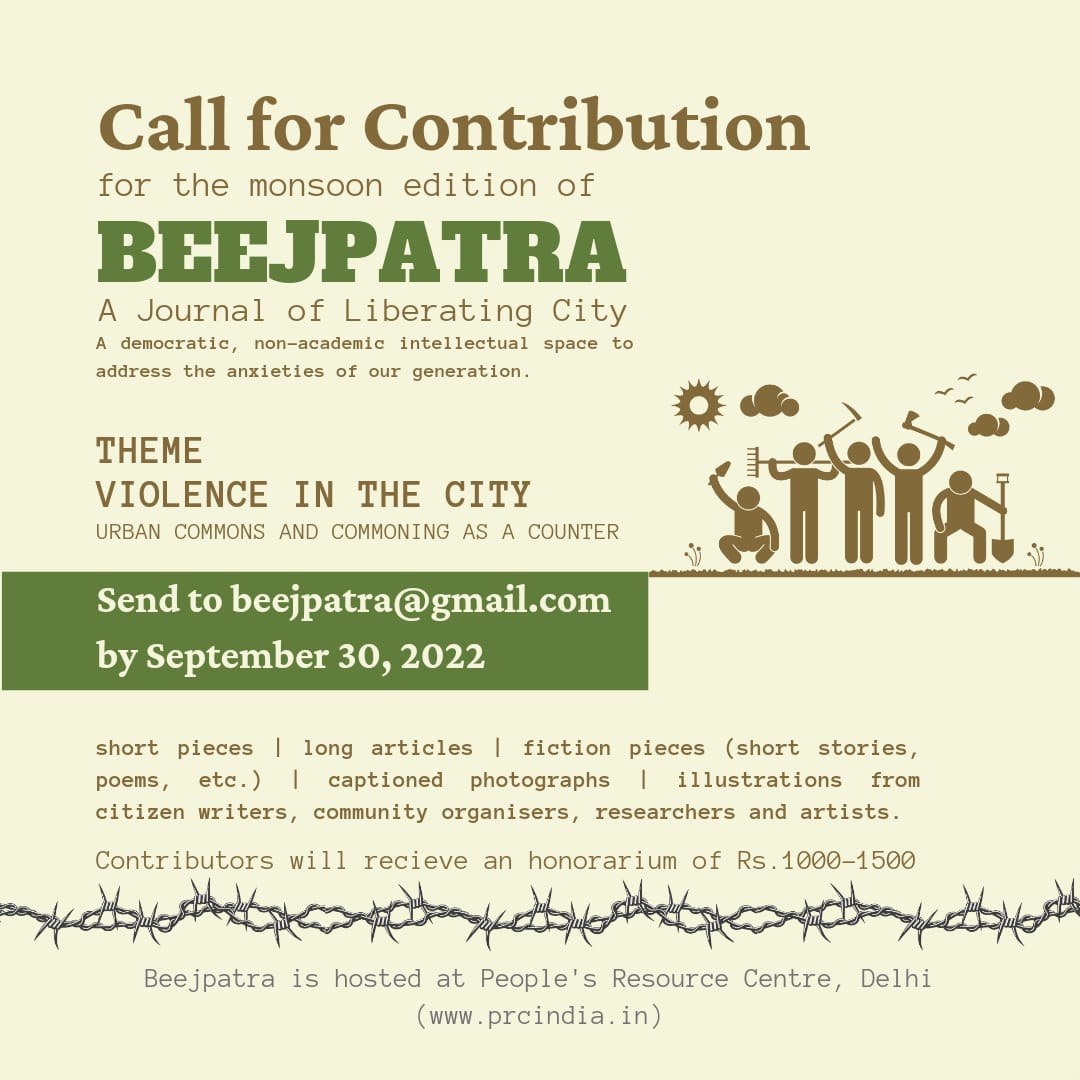 Beejpatra: A Journal of Liberating City.

Beejpatra in Hindi translates as ‘cotyledons’- the part of the seed which nourishes it till it grows its roots. In its previous avatar, Beejpatra started as a quarterly to gather and share knowledge on the status and potential of urban agriculture. We published 45 articles in its six editions in two years of its existence. We brought together a thriving community of readers and contributors comprising urban farmers and urban farming enthusiasts. It became a means for knowledge sharing, experiences from the field on urban issues, alternatives, commons and anecdotes.

Against the backdrop of sharpening social divides, the rise of fascism and ecological deterioration, the editorial collective of Beejpatra revisited the scope and purpose of the journal in the spring of this year and decided to engage a wider group of people interested in profound social, political and ecological transformation of the city and the public discourse around it. In its current form as an independent journal, Beejpatra is dedicated to germinating the liberatory ideas for cities and city-based social movements located within the national boundaries of India but intends to do so in dialogue with processes and contestations being witnessed by municipalities in other parts of the world and by resisting the difficulties of exchange that national borders cause. It holds the view that resistance today must avoid reproducing the social hierarchies based on caste, class, gender, religion, age or ability and work with an intersectional approach to create alternative futures in the present.

The editorial collective is committed to building this journal as a unique, democratic, non-academic intellectual space which can address the anxieties of our generation in a language that speaks directly to those whom the current relations of power leave frustrated on an everyday basis and who share a common interest of recovering the city as a place of enriched communal life in balance with nature.

In that spirit of collective exploration, we invite contributions in the form of articles, essays, reviews, poetry, fiction and artwork from citizen writers, community organisers, researchers and artists that question the growing despotism and illuminates the collective path to breaking free. The editorial collective encourages the young and new writers to share ideas on how they would want to contribute to the journal so that the collective can support them through the drafting and editing process from the beginning. We accept contributions that have not been published in any form (in print or online) elsewhere. However, Beejpatra is a copyleft publication, and the articles we publish can be republished elsewhere with the permission of respective author-contributors. To start a conversation with the editorial collective, please drop us a line at: beejpatra@gmail.com.

Cities are a complex whole of people, places, institutions and nature. But the model of development being pursued in the planning of cities is founded on the ideology of careless extraction for endless expansion for and by the social and political elite, which cannot care any less about this complex web of life and can only advance by dispossessing and undermining the interests of the working class and marginalised communities.

Violence is at the heart of this process. Violence- of patriarchal capitalism, against communities and against nature, through new and old forms of expulsions and enclosures, licenced and protected by the state, which permeates all parts of social life and exercises a monopoly over it. One might get a feeling reading the more conventional accounts of the historical evolution of cities that it is synonymous with the growth of civilisation. However, cities are also the sites where violent and large-scale destruction of those very elements that allowed cities to thrive occurred. In the present Indian context, violence and city life appear so profoundly associated with each other that it proves hard even to imagine whether a non-violent city ever existed or can ever exist.

Therefore, the inaugural edition of the reconceived Beejpatra journal is dedicated to exploring the linkage between structures that insinuate violence and the patterns of urban social life, cultures of domination and defiant responses of citizens. The editorial collective realises this is probably too broad a theme for a single edition of a journal like Beejpatra. We also think that our shared interest in liberating the cities from social and environmental injustices will not be realised if we remain uncritically faithful to corporate and government leaders who ensure that power asymmetry is maintained. The larger public remains content with merely a tokenistic ownership in our shared future. While we all are aware that our shared goals draw a sharp contrast with the intentions of the elite privatising and corporatising all kinds of urban spaces in the name of abstractions such as growth, economy and efficiency, people with integrity are losing confidence in the political institutions that theoretically promise to advance the constitutional values. The need to organise directly against denaturing and disintegration of society can hardly be denied at this hour, and long due is a movement that can bring together different urban groups to work together on ideas of shared ownership, decentralising urban planning and localising decision-making power.

This edition’s particular focus will be on urban commons and commoning as a counter to the violence structured in the city. In attempting to do that, we wish to bring to the forefront the accounts of citizens and communities witnessing the brutality of how cities are planned and the urban order maintained. Among other things, there is a need to develop methods and a sound understanding of commoning the city in the Indian urban context. We think commoning can be a radical alternative to current ways of envisioning, planning and building cities when climate change and obscene social inequalities ravage the promises of the urban life that finds itself more enclosed daily.

Elinor Ostrom, who studied various natural commons worldwide, described commons as biological or social resources that are shared and jointly managed to ensure benefit for all stakeholders. They can be of any form, such as land, knowledge, culture and the internet. Her work armed those questioning the governing ideology of neoliberalism. It demonstrated that many natural resources such as water bodies, forests and fisheries could be managed collectively by communities, without a takeover by the state or private corporations, and can achieve the well-being of their members while also ensuring the sustainability of the shared resource. However, we tend to incline towards a more active conceptualisation – Commoning. Commoning, as Peter Linebaugh defined it, can be understood as any collaborative practice that draws on mutual aid (or simply taking care of each other) by responsibly appropriating the resources that belong to all. Commoning is about reclaiming the air we breathe and the land where our food grows, the sources of energy which power our urban existence and the technologies that make life easier. Most critically, it is about awakening political consciousness and regaining popular control over the affairs that affect all of us. Commoning is not just a utopian idea but a way of organising society that already exists in many parts of the world.

Learning from these ongoing practices and other historical experiments, our civilisational heritage, commoning the city can bring social-ecological resilience and reshape a collective identity as citizens. It may sound like a fairy tale, but the question is how to work with the available tools – undoubtedly sufficient to realise prosperity for all – to regain the power of imagination and turn cities into non-violent, living and liberated organisms. How can urban commons and the act of commoning help tackle violence in the city?

We seek contributions from activists and researchers responding to these and related questions. We particularly welcome contributions from Dalits, Adivasis, women and people belonging to the LGBTQIA+ community. Contributions can be in the form of articles, essays, poetry, fiction (in short as well as long formats), reviews and artwork (including captioned photographs, cartoons, comics and posters) that respond to any of the following concerns (or even more broadly falling within the scope of the journal described in the ‘About Beejpatra’ section):