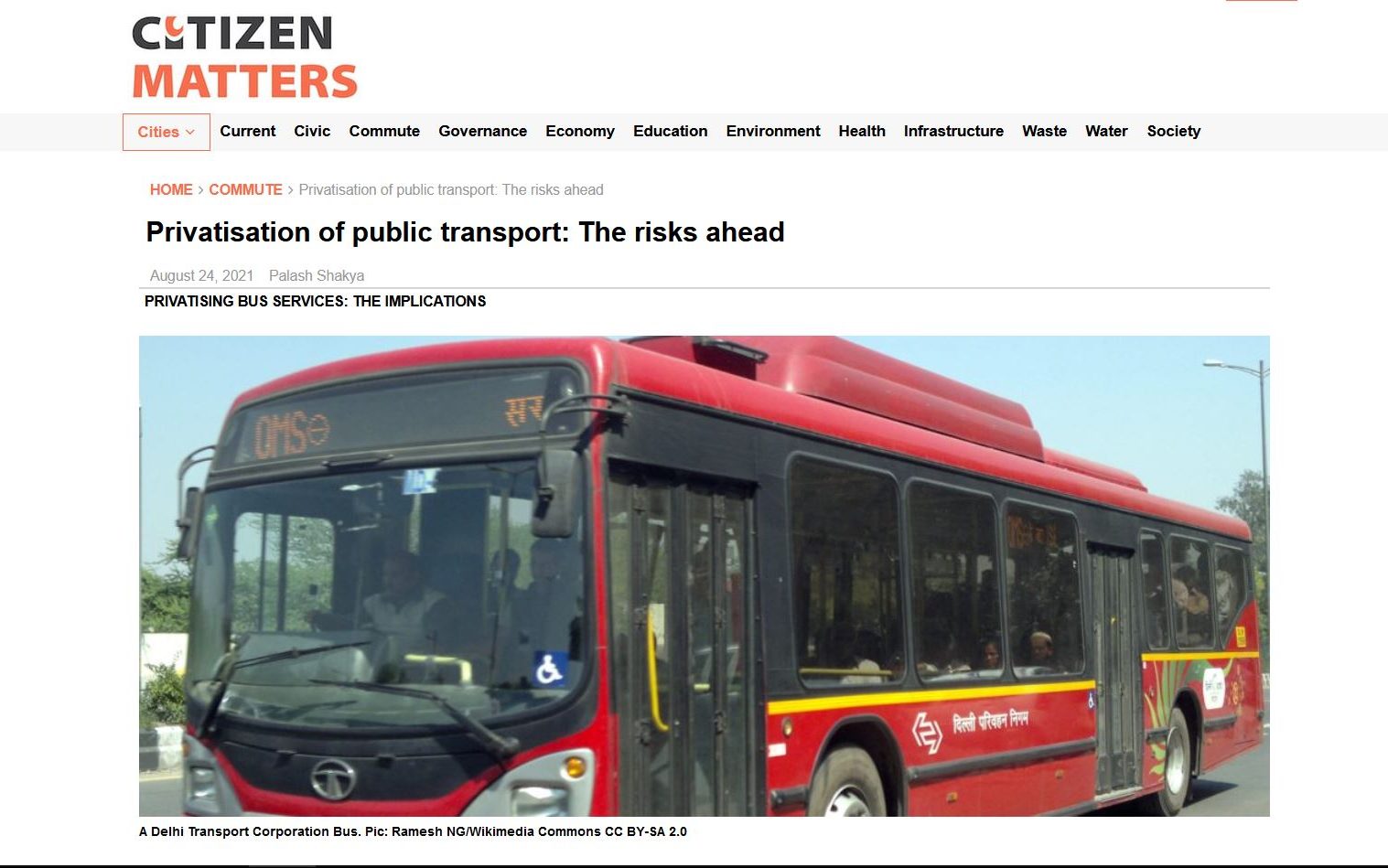 [Originally published in Citizen Matters (Link to the original article)]

As a student of history, I was inquisitive about the evolution of the BEST bus services of Mumbai. My quest for truth eventually landed me at the BEST Bus Museum located at Anik Depot in Sion. Although it highlights the deep and enriching history of the evolution of the city’s transport system, I was disheartened by the dilapidated conditions of not only the museum but also the cluttered and filthy workplace. Not much has changed since then. Instead of bringing in reforms to initiate a healthy working environment culture, there have been proposals to privatise the space. This is a sign of the overall approach of the government, leaning towards exit from not only secondary, but also essential public services in urban metropolises. Privatisation of public transport is just one component of that overall strategy. The government has embarked on a journey to reduce its role from many strategic and non-strategic sectors. In the budget speech of 2019-20, the finance minister unveiled the National Infrastructure Pipeline of 102 lakh crores. This involves major participation from the private sector, which, according to the government, will help bring in a pool of experienced developers, finance professionalism, efficient dispute resolution and also attract players who are not able to participate in Public-Private Partnership (PPP). Since the transport sector of India forms the fastest growing area for infrastructure and is expected to grow annually at the rate of 5.9%, plans to deregulate and increase private competition are being envisaged and carried out in the public transport services as well. Robust transport infrastructure in metropolitan cities is necessary to manage the increasing population and migration. Professor Amita Bhide, Dean of the School of Habitat Studies Centre at Mumbai’s Tata Institute of Social Sciences has found in her research that 77 per cent of the road space was occupied by private vehicles that leads to congestion. Added to this, there are fewer available bus fleets of public transport services. In 2017, while the demand for public buses was around 3.74 lakh, only 1 lakh buses were running on the roads. Even when suburban rail transits form a major part of the daily commute in metro cities, it cannot be denied that buses are still being used for last-mile connectivity as well as for feeder services. Professor Geetam Tiwari from IIT Delhi, who has about 25 years of professional experience in the area of Transport Planning, argues that efficient bus services can be the cheapest mode of overall transportation in urban areas. But in most of the states, the situation of state-owned enterprises in the sector is grim and thus they are pushing for privatisation of public transport to revamp the entire structure.

Delhi’s bus services have been an exemplary model for many cities across the country. This process of systematically inviting private players to run city bus services began here in the early 1990s. Some scholars argue that such decisions were taken due to the rise in subsidies, dependency of state corporations on government loans, the decline in occupancy of buses, increased corruption and inefficient management. State governments of Delhi have experimented with various models of privatisation of public transport, specifically buses. One of these was Delhi’s infamous Blueline bus system. It was a fully privatised system where buyers were responsible for running the buses as well as their maintenance. Due to increased competition among the private players, there were incidents of rash driving, frequent violation of norms, increase in fares as well as irregular timings. They popularly began to be known as “killer buses.” After much deliberation, this model started being phased out from 2008 onwards.

Currently, the government is operating a cluster-based approach where private entities run their buses in the allotted clusters and maintain the fleet as well as the staff. They are incentivized on an index-based system based on their performance and quality of services. On the other hand, BEST bus services in Mumbai which has a current size of 3900 buses approximately has taken around 1100 buses on wet-lease. Under wet-lease, BEST procures the buses from the contractors for a fixed rate per kilometre. The contractor provides both the bus and the driver, and takes care of maintenance as well. BEST has further plans to take at least 4800 more in the near future — the plan to privatise buses is in full swing.

The dilemma of Public-Private Partnerships (PPP)

Does PPP provide clear advantages over the ‘purely’ public and private modes of operating urban infrastructure? Advocates of PPP hold the belief that private players provide efficient management systems, bring finances and create opportunities for knowledge transfer from advanced economies. Recently, even the central government announced a new scheme to operate 20,000 buses on the PPP model. But the evidence does not concur. Restructuring is crippled with its own problems. One such problem is rampant contractualization. Most of the workers in the private sector are hired temporarily. This leads to irregular and low wages, no social benefits and recurrent exploitation by the authorities. In April and May this year, several BEST drivers went on a sudden strike to protest against overworking and underpayment. Leasing out also puts the employment of the existing workers at stake. While the unions at Delhi and Mumbai have time and again raised their issues, the grievances remain unresolved.

Anita Kapoor, who is associated with Urban Women Workers Union in Delhi, argues for an inclusive urban transport policy as most women depend on public bus transport for their work. Thus, there is also a gender dimension to the fall out from privatisation of public transport in terms of access. Privatisation doesn’t even guarantee efficiency, as it largely depends on the management. A senior officer in BEST complained that even wet-lease buses are run without conductors. These buses sometimes stop at any place which causes a lot of trouble for a common man. In some cities, there have been instances where private operators have also allegedly charged exorbitant fares.

It is the business of any elected government to work for public welfare. Thus, any mass transport system that is meant to be used by the public has to be regulated so that it remains safe, efficient, accessible, affordable, and available for all.‘Reclaiming The Bus’ is one such campaign for free, safe and reliable bus-based public transport. It is being organised by the Institute for Democracy and Sustainability in association with the Sustainable Urban Mobility Network (SUMNet) India. The campaign is also pushing for the formulation of a state bus policy in Delhi, that can bring a commitment of the government to improve bus services in a timebound manner. The Bus Rapid Transit (BRT) system pioneered in Brazil’s Curitiba focuses on separate express lanes which helped in increasing the average speed of the buses, cut down the maintenance costs and reduced environmental pollution. Cities like Indore, Ahmedabad, and Surat have also incorporated different models of the BRT system with a view to bringing in more ridership for buses. To increase ridership, they have also suggested scrapping unfair taxes (Property tax, Toll tax, etc.) and introducing charges and fines which can be used for their revenue. Considering there is a separate budget allocation for infrastructure, moving the public bus transport system from the service category to infrastructure can be helpful. With increasing urbanization, the demand for public buses is definitely going to increase in the future. Public Transport systems are ventilators of the poor and marginalized sections of society. They facilitate the livelihood of the poor and provide them access to mobility. We cannot and must not let the system unravel.

Palash Shakya is currently a research intern at People’s Resource Centre (PRC) and a graduate student at TISS Mumbai. This article was written with support from members of the PRC. It has also been benefitted from contribution and feedback from Geetanjali Gurlhosur.