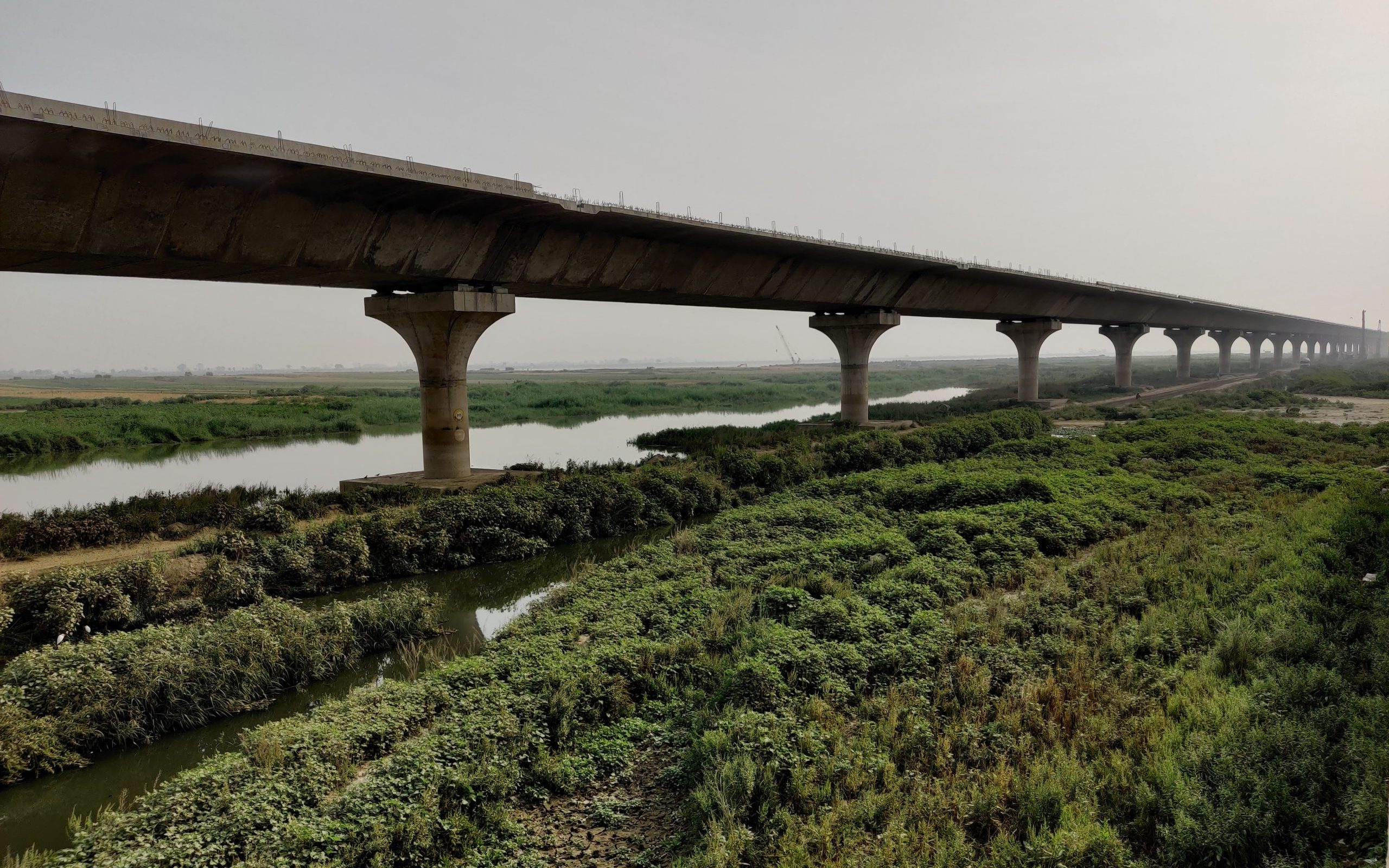 After much delay, the Bihar government is finally pushing ahead with its 20.5- km expressway project, being built along the banks of the river Ganga in the state capital Patna. For the past two years construction has been going on in full swing on the Ganga Pathway, whose foundation was laid way back in 2013 but its execution has repeatedly got delayed due to suspension in environmental clearance and land acquisition hurdles. So far, the authorities have completed about 35 per cent of the project, which will connect Digha, on the western edge of Patna, to Deedarganj in the east.

The government claims that the four-lane wide roads, being built at an estimated `3,390 crore, on the southern bank of the river, will not only reduce the travel time between eastern and western Patna from over an hour now to just 20 minutes, it will also decongest the capital city’s busy Ashok Rajpath. The pathway will remain connected to Ashok Rajpath at eight places and will be flanked by green belts and broad walking tracks along the river bank to resemble Marine Drive of Mumbai.

A few visits to the project site between June 2020 and March 2021, however, show that the impact of the construction works on the Ganga, its surroundings and those living in the floodplains will far outweigh its benefits. In all probability, the project will make the capital city prone to flash floods, leave it bereft of fertile lands and reduce groundwater availability in this sprawling metropolis.

At several stretches, the pathway is being built on the Ganga’s active floodplain, which acts as the river’s extended boundary and absorbs excess river discharge during the monsoon or extreme rainfall events, and allows it to change its course. During the process, the river recharges groundwater, provides life-sustaining conditions to plant and animal habitats along the river banks, and deposits the fertile alluvial soil on its banks. Any damage or fragmentation of the floodplains thus harms the riverine ecosystem, hinders its groundwater recharge capacity and poses threats of flash floods.

This is the reason floodplains are considered environmentally sensitive regions and experts have from time to time recommended to regulate development activities and prevent encroachments along the rivers and floodplains. In 2016, the Union Ministry of Environment, Forest and Climate Change came out with a draft river regulation zone notification, proposing to declare river stretches and flood-plain zones as conservation zones under the Environment Protection Act, 1986. While Bihar, like most other states, has not enacted the regulations, the Ganga pathway is only going to make more areas in the state prone to flooding—about 73 per cent of Bihar is flood-prone, according to a study by Observer Research Foundation.

During our visits, we have found that about 5.5 km of the expressway, from Digha to Gandhi Sanghrahalaya, is being developed in the form of an elevated road built on a heavily concretised embankment. A considerable area around the embankment has also been paved with concrete. While such embankments are usually created with a false sense of protection from floods, the fact is cemented embankments constrict the river flowing path, further increasing the risk of flash floods even at slightly higher than normal river discharge or rainfall.

Proceed towards Deedarganj after crossing Gandhi Sanghrahalaya, and one can see at several places pillars being built inside the main river channel of the Ganga by laying pile foundations on the river bed. These are the stretches where the pathway is being built as an elevated road. During a visit to the project site near Gai ghat in January this year, construction workers had explained that piling work for the expressway typically involves setting up 50m x 20 m rectangular frames at periodic intervals on the river using vertically fixed wooden logs. Huge amounts of sand, mined from the river bed, and construction debris are dumped into the frames to give it a solid foundation. It is then layered with a thick sheet of soil to create a sturdy base over which the expressway pillars are structured.

(Precast concrete plant in the background on the riverbank. Photo credit: Archana Singh)

Such constructions would definitely slow down or even obstruct the river’s flow and lead to excessive sedimentation around the pillars, eventually constricting the river channel further and increasing the risks of flooding.

Adding to the problem is precast concrete, which has made the construction process fast and easy. It is a ready-to-use construction product produced by casting concrete into specific moulds. For the expressway, precast concrete plants have been set up on the river bank. One such plant is located right at the bank of the Ganga, about a kilometre from Anta ghat, near Digha. The site offers a significant advantage for the plant since it provides an abundant supply of sand to build precast concrete structures which can then be transported quickly and cheaply via boats to the construction sites. Over the past decade, brick kilns have mushroomed along the Ganga to cater to the booming construction industry in Patna. While they also use a mixture of sand and clay to manufacture bricks, sand mining by the precast concrete plants has resulted in huge depressions on the river bank. The structures also leave behind a trail of construction and demolition debris in the riverbed and floodplains.

The impact of the Ganga Pathway is already palpable. Since 2019, the Ganga has moved away from its southern bank in Patna at least at seven ghats: Collectorate ghat, Anta ghat, BN College ghat, Mahendru ghat, Adalat ghat, Mishri ghat, T N Banerjee ghat. The stretch between Krishna ghat and Collectorate ghat has shifted away by between 1 to 2 km. 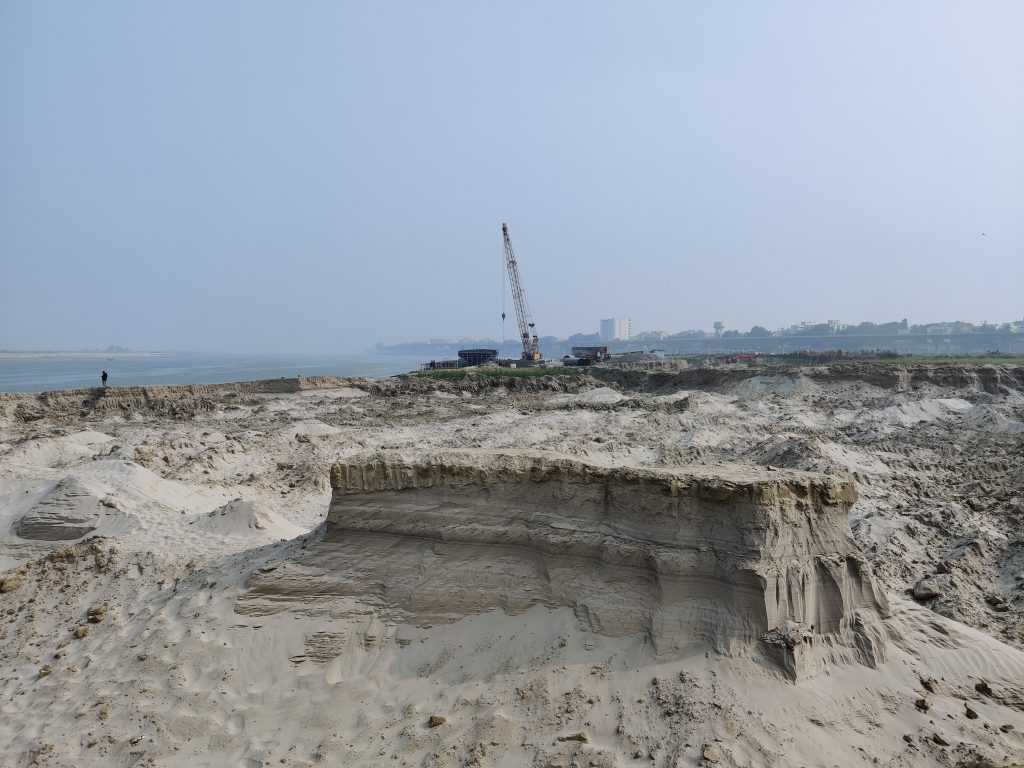 (Precast concrete plant in the background on the riverbank. Photo credit: Archana Singh)

This has put the Bihar government’s another pet project, the Ganga River Front Development project, in a fix. Started in 2014, the first phase of the project aims to redevelop 20 ghats and connect them with walkways, along with the development of parks and cultural centres. So far in the first phase, 6.6-km has been built that connects about 10 ghats. While several of the ghats now face a dry stretch of land since construction has begun on the pathway. Wherever the river has stayed, the view of the Ganga that these riverfronts are supposed to provide is blocked by the expressway.

Agriculture has been a primary activity along the Ganga floodplains as it offers two vital inputs— fertile soil and an uninterrupted water supply. In Patna, most farmers on the Ganga floodplains are small landholders and grow vegetables (pumpkin, cucumber, okra, cabbage, brinjal, cauliflower, tomato, potato, radish, spinach, coriander) and fruits (guava and banana), other than wheat and mustard. The city has been their main market. However, since the commencement of the project, farming has seen a huge setback. Farmlands form a major chunk of the private land acquired for the Ganga Pathway. While government sources maintain that the hurdles related to land acquisition for the project have been resolved, at least 20 farmers near Digha claim that they are yet to receive any compensation for their land. “Earlier, the government had taken away 13-acres (5.2 ha) of our land for setting up a sewage treatment plant under the National Mission for Clean Ganga, and this time, it has acquired land for the pathway,” alleges Jaddu Mahto, a farmer leader in Digha whose one bigha (about 0.25 ha) has been acquired for the project. “It is also deliberately not collecting taxes on our land to paint us as defaulters so that it can land automatically declare our farmland as khasmahal (government-owned),” he says, adding that the government is trying to establish a narrative that no private land exists and hence, no compensation needs to be given.

Those who have not lost their farmland to the pathway, too, bear the brunt of it. “A thick layer of dust remains settled on our crops. This has stagnated plant growth and reduced productivity by 30 to 40 per cent since the beginning of the project. This year, we may not be able to grow anything as construction workers have mined river sand ahead of the monsoon and dumped on our fields,” says Sudama Rai, a farmer whose land lies next to the construction site in Digha. Such plights and concerns are only going to mount as the government plans the second phase of the project, which would extend the four-lane roads by another 18 km.

(Archana Singh is a researcher at People’s Resource Centre, Delhi. Rajendra Ravi is an Urban Social Planner and associated with the National Alliance of People’s Movements)